that powers nearly 3% of the world's websites

Because of Joomla’s extensible structure, there are not many things you cannot do. That is why it’s the perfect application framework for individuals, small business, and large enterprises. What sets Joomla! apart from the rest is the dedication to keeping things as simple as possible while providing the most features possible. Joomla! enables users of all types to build websites and powerful online applications.

Check out our Pricing 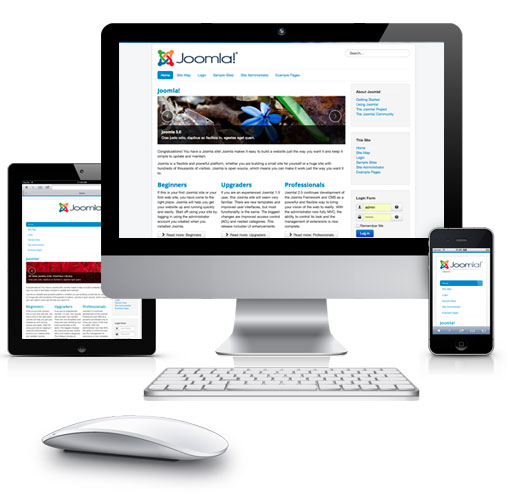 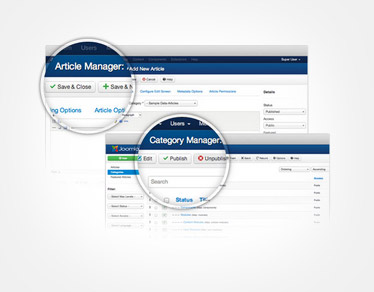 Using the core Joomla! Article Manager, users can easily create content that is displayed that might be shown in different locations on the page. Articles typically contain some text, pictures or other type of content and for most types of Joomla sites.

The Category Manager exists to help users save Articles logically, so they can come back in the future and do an Article search very effectively. Categories exist primarily in the Administration area (the back end) of your Joomla! site, but sometimes they are used for specific Menu Items or Module types.

There are many powerful tools within your Joomla administration area that allow you to support your own marketing efforts and improve your search engine results. You can optimize your titles, article descriptions, headers, files and even your images to help people find you on the Internet. You can follow all of the best practices of Search Engine Optimization by structuring your URL and developing a long-tail SEO campaign which will ultimately increase your PageRank and improve the popularity of your Joomla site. 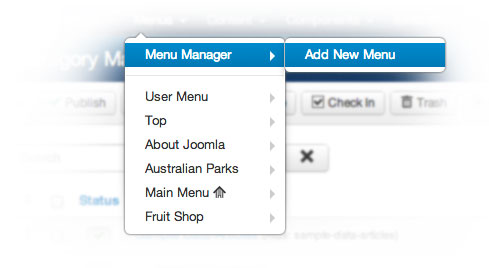 One of the features that separates Joomla! from other CMS is the versatile Menu system. Site administrators can develop an infinite amount of Menus and Menu Items that have different functionality. Menu Items can be connected to Articles, but core Joomla! functionality also contains registration, login, contact, web link, and other Menu Items to choose from.

Manage all of your media in one place

The built in Media Manager supports a variety of different file types that can be displayed or utilized in the site. While most common media types are supported, a file type can easily be added to the Media Manager if you'd like to utilize it within your site. From .pdf documents to video and music files, Joomla! will recognize it. 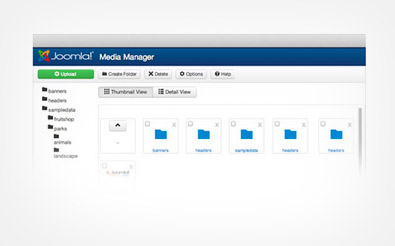 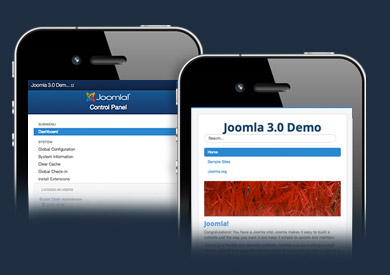 While Joomla has traditionally looked great on all types of devices, one of the big steps forward taken by Joomla 3.0 is an all new front end design and administrator interface that are entirely mobile ready. Because Joomla! developers adopted the Bootstrap framework, the front end of Joomla websites can display mobile friendly content for visitors and the back end interface incorporates many mobile friendly tools for administrators. Joomla looks great and sites can be developed with ease no matter which type of device is used.

The building blocks behind Joomla!

Modules are the building blocks of the visual Joomla! website. Modules can contain customized text and images, but they may also feature calendars, shopping carts, registration forms, video files, image rotators, log in forms, directories, forums and many others. Modules can be placed into a variety of positions on the site depending on the Template being used and positions can easily be changed. 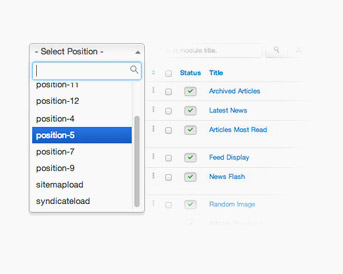 Although the core Joomla! features allow quite a lot of functionality, if there is something that you would like to feature on your site that is not part of the core Joomla! package, there is an Extensions Directory that contains thousands of 3rd party Plugins, Modules, and Components that can be added to the site. The directory - located at extensions.joomla.org - is where users unlock the true potential of Joomla! Extensions generally come with some instructions and extension developers can typically be contacted with questions. An extension may be a very large Component, like a Template, that is added to the site.

Components are robust pieces of software that can be modified in the back end of the site, and users see the Component on the front end. Modules perform specific functions, users can see them on the front end of the site, and the administrator can modify them in the back end, but they are smaller than Components. Plugins are very small pieces of software that can be added to the site they increase the functionality of users in the back end. Users typically only see the effects of the Plugin on the front end. Once installed, Joomla! contains a separate manager for each - a Component Manager, Module Manager, and Plugin Manager - that allows administrator to configure the software for their specifications.

Thematic Templates - easily change the look of your site

A Template controls the overall look and layout of a site. It provides the framework that brings together common elements, modules and components as well as providing the cascading style sheet for the site. Both the front-end and the back-end of the site have Templates.

When Joomla! is first installed several Templates are automatically included. Users can find many more templates online - some commercial and some noncommercial - and Templates can typically be customized to a certain extent. Templates are managed with the Template Manager in the back end of the site, and in this area users can select and edit default Templates, make copies of Templates, and assign different Templates to different pages. 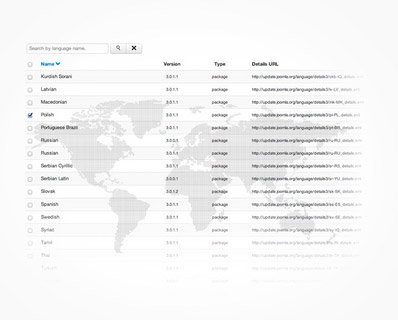 One of the things that Joomla! focused on with its most recent release was the internationalization of websites and encouraging users and website owners to create sites that can be accessed from anywhere in the world. One of the biggest barriers to that was language accessibility.

The Joomla! Community tackled that head on with the new and refined Language Manager and other multilingual capabilities now available in Joomla! 2.5. Now, webmasters and content creators can create websites to be presented in multiple languages, without ever needing to step outside of the options available in the Joomla! core software. This is a big step forward and represents a set of capabilities that can make websites much more accessible, reaching out to a much larger audience.

The automated notification of Joomla! updates is a new built-in feature that simplifies site maintenance and management of updates. Available as a quick button on the administrative control panel of your Joomla! website, it enables administrators to update a site to the latest stable Joomla! release with just a single click.

As the name implies, Global Configuration is the area of Administration interface where site administrators can make changes that affect the global behavior of the website. All of the parameters for the Site, System, and Server can be configured here and additional Permission levels can also be controlled here.